Celebrating his 22nd year shaping steel, the art of blacksmithing has been a spiritual journey for Sam, combining the four ancient elements to make objects of art and function. His hope is that people not only find his work useful in their daily lives, but are also inspired by it.

Sam Laturi grew up in Iron River, a small town located on the south side of Michigan's beautiful Upper Peninsula. Iron was everywhere from the abandoned iron mines his grandfather worked to the names of the places around him. Sam began studying blacksmithing in 1997 under Dale Wedig at Northern Michigan University. His love of blacksmithing started as an elective class and then turned in a passion for metalworking. When asked about where his passion for blacksmithing comes from, Sam said, "There's something spiritual about combining the four ancient elements into objects of art and function that will exist long after I am gone. A hundred years from now, a father could pass on a fireplace set to his son and there’s my touchmark. A couple could be passing a gate as they walk down a sidewalk, there’s my signature, my legacy."

He went on to earn his degree in Business Management with a focus on entrepreneurial consulting and moved to Milwaukee, Wisconsin soon after graduating. He continued to study and practice his craft as he could. In June of 2009, a chance meeting with a former administrator at Camp Timber-Lee introduced him to Greg Meeker, the camp's resident blacksmith for over 40 years. Sam soon became a volunteer for the camp and Greg's apprentice. Since then, Sam has demonstrated the basics of blacksmithing to over 3,000 campers from inner-city Chicago youth, to Daisy and Cub Scouts, to men's support group retreats. When he wasn’t demonstrating, he created works of art or built or repaired needed items for Timber-Lee under Greg’s tutelage. He fondly recalls one particular boy from a 5th grade class. He had question after question to ask about blacksmithing. When his teacher finally convinced the boy to leave, he ran out of the smithy with his arms waving in the air yelling, "I so want to be a blacksmith when I grow up! I so want to be a blacksmith!!!" Sam looked over to his mentor and said, "Got one."

He began creating custom pieces for friends and family and selling small pieces online. As online sales increased and requests for quotes came in with greater and greater volume, Sam knew it was time to make his blacksmith business official. In August of 2011, he registered with the state of Wisconsin and Milwaukee County and began doing business as StormCloak Forge, a lifelong dream. The name “stormcloak” originated from his college days in Marquette, Michigan and a cloak he'd throw over his coat during those bitterly cold winter storms. His friends started calling it his stormcloak and the nickname stuck.

Sam recently completed restoring the new home of StormCloak Forge, LLC - a stone and mortar building located in Mequon, WI and originally built in 1844 by Ephraim Woodworth. He continues to make art and functional items there, but also teaches those interested in blacksmithing. “I think it is our duty to share knowledge and skills in this life with anyone we can. If someone thinks they may have a passion for blacksmithing or even just a passing fancy, I am here for them.” When he’s not in his smithy, you can find him at the Milwaukee Maker Space where he enjoys practicing his craft and giving advice to new blacksmiths as they begin the journey he started back in 1997. 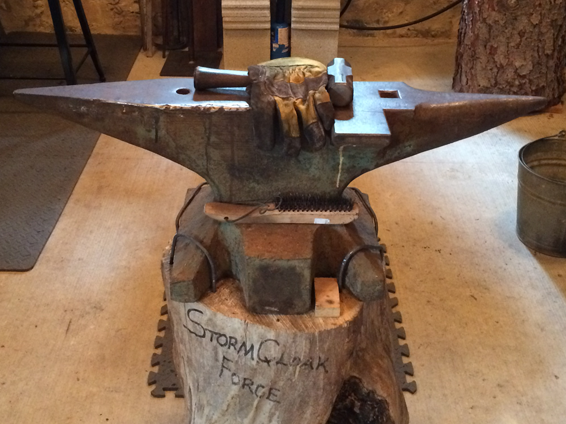